2days left, special offer over 90%off on The Sun Origin: Post-apocalyptic Action Shooter. Any post-apocalyptic genre fan should not miss; here is why.

The Sun Origin is a post-apocalyptic single-player first-person shooter game, developed by AGaming+ for Android and iOS devices. Released in October 2017, the game is far from new, but is still better than many mobile FPS games available today. Now with the special discounted price, the game is a real bargain, especially for people who love the post-apocalyptic genre.

The backstory of The Sun Origin

In the year 2050, our sun produces the largest solar flare ever in the history of the star. The solar storm reaches earth in minutes, destroying all our technology and causing a total blackout. Although predicted well in advance by the scientific community, the world leaders failed to act, and the glorious human civilization falls into dark ages.

In the next few days, the wave of high energy particles of the flare reaches the earth and cover the atmosphere in a deadly, radioactive fog. The fog killed everyone it touched; the young, old, rich, and poor all fell in equal measure. Only a handful of people that had taken shelter in abandoned nuclear bunkers survived.

When the communities start running out of supplies, survivors emerge from their shelters only to witness a very different world than that they had left. In the new world, the law of the strong had replaced the rules of the former civilization, and warlords control the few areas that remained free of radiation and had clean water with cultivable land.

The Sun Origin takes place more than 100 years after the solar flare. The game revolves around Raven, a young warrior from the community North- 216. His ancestors were among the few Lucky who survived the apocalypse. While the surface became unhabitable, many communities have somehow managed to survive in the underground nuclear shelters for generations.

With almost no supplies left, Raven is tasked with scavenging in the unforgiving radioactive wasteland to help the community survive. It is extremely dangerous, as the surface is full of perils.

From mutated creatures and humans to other factions and bandits, everything tries to kill survivors at sight. But thirst hunger and radiation can kill even quicker.

There is a lot to do in the radioactive wasteland, but the main goal of the players is to complete the tasks and gather supplies to help the community North-216 survive. Some of the jobs are easy, while most of them are challenging.

Supplies are hard to come by, and the radiation drains your health at an alarming rate. The mutant creatures are aggressive and do a lot of damage once they surround you. So, it is better to get rid of them from a distance.

As the game progresses, players confront other human beings from factions and groups of bandits more frequently. While not as strong or fast as mutant creatures, humans have advanced weapons and armour and can quickly finish you off with a few good shots. So, upgrading your pieces of equipment is crucial for survival.

Better weapons and armour can be found on the surface while scavenging or can be brought from merchants in exchange for other supplies. Players can also upgrade their existing gear when they have the necessary ingredients.

Being a post-apocalyptic survival genre game, The Sun Origin forces players to keep a sharp eye at their stats as hunger, thirst, and poisoning on the surface can kill before other enemies do.

The Sun Origin offers pretty smooth gameplay with excellent graphics and proper controls. However, the strongest point of the game is the vast wastelands and the narrative. Very few post-apocalyptic genre games on mobile games can give you the vibes that this game does.

The game forces the players always to be alert and aware of their surroundings, which can become very difficult at times, but it only makes survival more enjoyable. If you are a hardcore survival fan, The Sun Origin is the game for you. 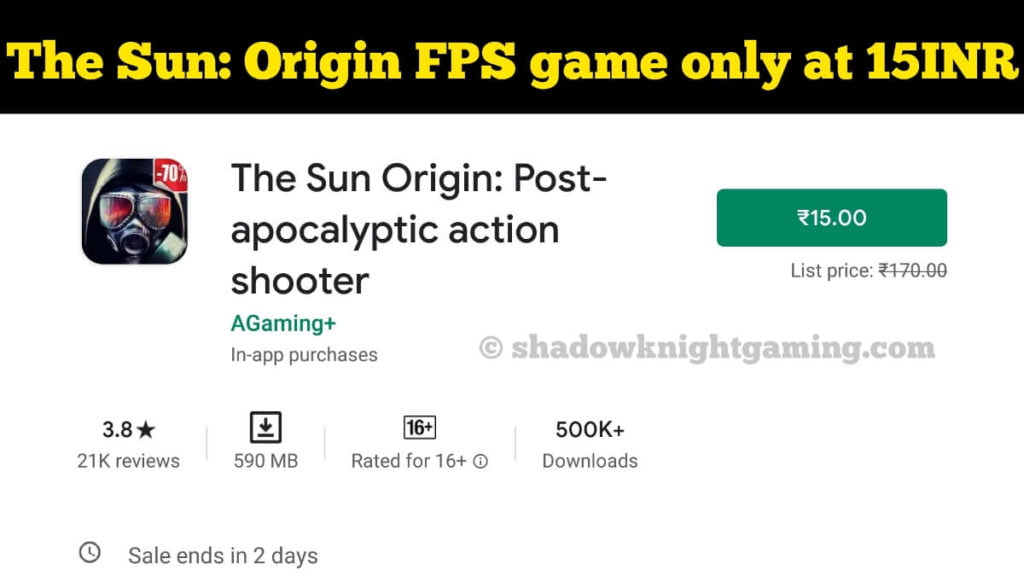 AGaming+ is offering the game at a special price till May 31st, giving away a massive 91% discount. The original price is INR 170/- but it is available now till May 31st at only INR 15!! this is virtually free!!! It is a chance that no one should miss. Download The Sun Origin from Playstore.