As children, we all have loved Dinosaurs. When I was a kid, I was obsessed with movies and tv shows such as Jurassic Park and Dino Squad. Like most children of my age, I would imagine myself as a giant dino fighting other vicious creatures. Now, as adults, you can finally fulfil that childhood dream with Pixonic’s latest release, Dino Squad.

Dino Squad is a hectic multiplayer PvP shooter game with an unmatched knowledge of scale and gameplay variety. This is almost an action-packed vision of the Land Before Time. War Robots developer Pixonic finally launched this action-packed shooter game yesterday.

Dino Squad is now available to download and play from the App Store and Google Play store.

You can play with 17 dinos in the game. They all have their own fighting combat styles, perks, and weaponry. You must think the mighty T-Rex would be the best choice every time, but it’s not that simple.

Dino Squad has been balanced in such a way that even the humble Velociraptor can take down the biggest, most brutish reptile kings and queens. 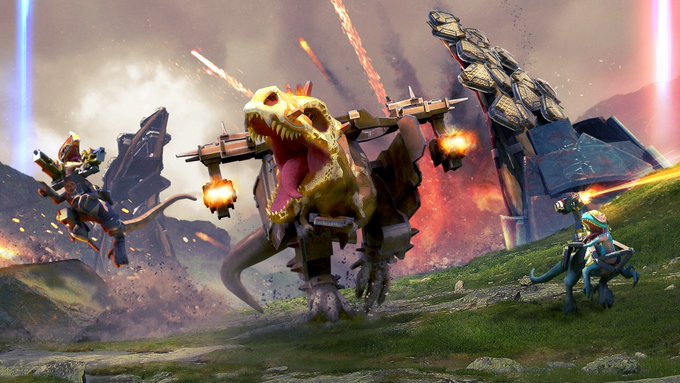 Pixonic is a Moscow-based developer company. They are well known for the hit tactical shooter MMO War Robots. With Dino Squad, they have combined their Robo-brawling expertise with prehistoric creatures. This makes the game even more interesting.

Being a dinosaur, I would have to think that you’ll be throwing around the odd tail-whip and chomping down on your enemies with those critical gnashers. But most of the combat takes place using ranged weapons, much like War Robots. Players get to choose from an extensive arsenal of weapons containing rail guns, rocket launchers, mini-guns, and much more.

Dino Squad incorporates certain tactical/strategy elements, with players having to know when to play carefully or go in for a full-on assault. Furthermore, there are various environmental elements such as scorching lava pits and wild rivers that can be used to your advantage.

Choose the Perfect Dino Fighter, fight for your Survival, and become the Dinosaur King. This game has everything you can wish for! Pixonic has promised new customization and upgrade options in the future. Any development they might have made during the first betas will be included in today’s full release. We recommend that you log in with the same Google Play or App Store account to check out the full details.

If you’re looking for a cool fun action game, then definitely Dino Squad is a must-try. The mobile game is available as a free-to-play title from over on the App Store and Google Play.

That’s all for today. Thank you so much for reading through! If you enjoy mobile games and want more NEWS from the Gaming World, Click the red bell icon.

Here are the Best Metroidvania Games on iOS and Android

I hope you enjoy it!