The latest GARENA Free Fire Elite Pass ‘Fabled Fox,’ now features a classic story. It is a tale of two gang leaders and their thirst for vengeance.

Free Fire is a popular Battle Royale game that needs no introduction. Like most other games in the genre, Free Fire also has an Elite pass System. For all instances and purposes, it is an addon service that gives players access to exclusive skins, clothes, guns skins, and other additional rewards at a premium.

Now Free Fire has added a brand new Elite pass called Fabled Fox. However, this time the pass also features a back story.

Ben and Zarya are the two protagonists in this game; they spent their childhood peacefully in the Salter District. However, nothing lasts forever.

When Smaki gang invaded the district, Ben and Zarya were forced to flee their homes. Homeless and desperate to survive, the two had to work under another gang named Vulpes. Years passed like this way, but they never forgot the pain.

A decade later, both of them are now the leaders, and they decided it was time to fight, fight to take back their home district from the hands of Smaki Gang.

This story was based upon the Japanese mythology by Inari Okami, also known as O-Inari, the Japanese god of foxes. This god represented fertility, Agriculture, Industry, General prosperity, and Worldly success.

Fabled Fox Elite Pass is available for purchase for Free Fire users since June 1st, 2020, at an in-game price of 799 diamonds. You can also get an Elite Bundle Pass with instant access to 50 badges along with other exclusive rewards, for a discounted price of 1599 diamonds. 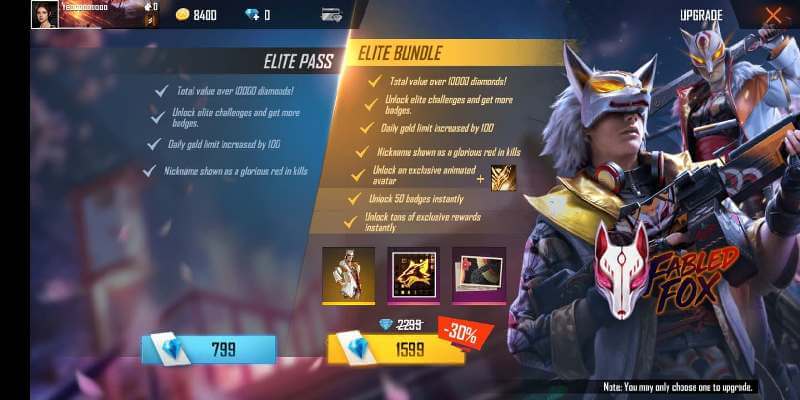 Free Fire is a free-to-play Battle Royale game available on android and iOS. The game has more than 500 Milion downloads on Google Playstore.