Global Spy is a delightful indie RPG game, where players get to explore the world of spies and mystery in an intelligence mission. All a player needs to do is trace the fugitive spies and mysterious items within the game. However, make sure to do that before your time runs out!

Yuyosoft Innovations is the developer behind the game. The Canada based studio has earlier developed games, like Chameleon Games, Mystery Picture, Strange Invaders, and many more.

Players start their mission by exploring major towns throughout the globe, hunting for fugitives roaming around from one place to another. So, the recent sightings of the Spies in diverse cities are essential for acquiring useful info, based on which one can begin their search.

You may also like: Spyjinx: Epic Games Reveals Their New Mobile Game for iOS

Global Spy starts relatively easy, with you almost always being able to capture the target in the first try. However, as the game progresses, things start to become a bit more interesting.

Despite successfully tracking down and discovering the Spies at higher levels, they tend to escape arrest at the last minute possible. Then, they will attempt to flee and take shelter to a nearby city or country. Besides, you might sometimes find that the target had already departed for somewhere else even before you had arrived there to capture them.

All in all, you need to figure out the quickest route to whichever city they’re planning to a hideout. So to help out users, the game offers a map for plotting the shortest path and catch yourself a spy. This feature makes the gameplay more enjoyable rather than tiring, as it feels like a cat-and-mouse chase with you trying to be one step ahead.

Additionally, Global Spy requests that you uncover the mystery things specified in your mission instructions. Unlike spies, these secret objects don’t change their location once the mission begins. Plus, you will find around two to five spies for every task, along with a relative number of hidden items. 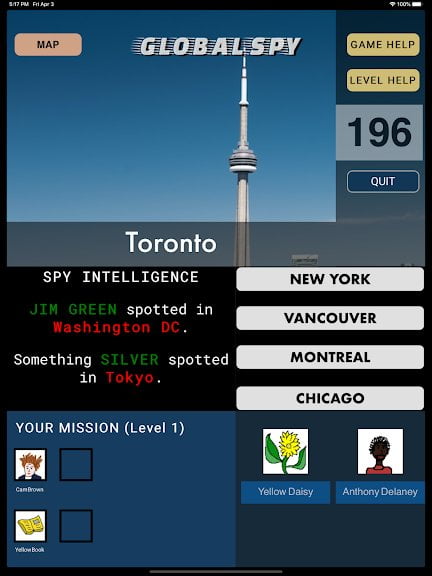 This mind game serves as excellent training for your brain, for improving memory, sorting out information, from various data sources, and practical route planning.

Although Global Spy is free-to-install, only the first three levels of the game can be played without any cost. However, players can make a one-time purchase to unlock the whole game and some additional features.

The one-time in-app purchase provides a Super Spy Pack with 27 extra levels, distinct spies, unique secrets, and many exciting challenges over the free version. Global Spy is available for download over the App Store and Google Play.