Grand Mafia is a mobile strategy game designed for mobile. The game is about recruiting criminals from the underworld and then commanding them to form a criminal gang. Yotta Games release these codes frequently and on some special occasions to maintain the interest of players in the game.

Today we have brought you the latest grand mafia redemption codes list to use and get free diamonds, building materials, speed ups, gold, VIP points, EXP, and more amazing gifts.

What are the Grand Mafia Redemption Codes?

Yotta Games, the developers of Grand Mafia, issue special codes which yield different gifts for the players called redemption codes. These codes are a type of incentive for the  players to stick through the journey of the game

These codes are sometimes region-specific and sometimes globally acceptable. These codes are released on special occasions like the game’s anniversary, festival, etc.,  or simply to reward the players.

These codes are released on various platforms related to the game or even mailed to players.

How to find Redemption Codes for The Grand Mafia?

The Grand Mafia Redemption codes are published by its developer on different social media platforms such as Twitter, Facebook, Instagram, Discord server, Reddit, and the game’s Official Website. These are mostly released on special occasions or when there are special partnerships. We keep updating this page with new codes, so keep following for more.

Step 1 – Open the game and click on your city map.

Step 2 – Go to your profile icon at the top right corner.

Step 3 – Go to ‘Settings’ on the bottom right side.

Step 6 – Press the ‘Exchange’ button and Voila, you receive your reward.

The Redeem window shows an Error

Are there any Gift codes for The Grand Mafia?

Yes, there are gift codes available for The Grand Mafia. These can be found on their official social media handles on special events. These codes are easy to redeem as well.

Can The Grand Mafia Redemption Codes have a virus?

No, not at all. These codes are safe for the game as well as your device.

Is there any specific level for The Grand Mafia Codes to be Redeemed?

No, these codes are for everyone. Levels don’t matter, anyone can copy the codes and get them redeemed. 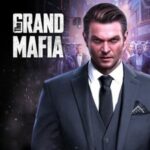