Here is a list of the Best Real-time Strategy Games for Android and iOS devices of All Time that you must checkout.

Strategy games are among the most ancient genres of gaming in the whole human era. Regardless of whether it be table games or even card games, we’ve been playing strategy games since some time before there was ever a PC.

RTS or Real-time strategy is a subgenre of strategy video games where the game does not progress in turns. Instead, RTS games allow all players to enjoy the game in “real-time” without waiting around for other players to play their move. Yet, the real assertion of using your mind to beat your competitor remains true even today.

What is a Real-Time-Strategy Game?

The term “real-time strategy” was coined by Brett Sperry to market Dune II in the early 1990s. It is a sub-genre of strategy video games that focuses on using tactics to defeat an opponent.

Real-time strategy games usually correlate to turn-based strategy games, where each player has to consider carefully before taking the next move without worrying about the action of his competitors.

In most RTS games, the player has to secure a position/structures and maneuver units, while destroying the assets of his/her opponents. Thus, Real-time strategy is sometimes used interchangeably with terms like real-time war game or real-time simulation.

But whether we talk about combining resource management, fights, or controlling the map, RTS games urges you to think smart and beat your opponents by using your skills.

Top 6 Real-Time Strategy Games To Watch Out for:

In this article, we have gathered the 6 Best Real-time Strategy Games for Android and iOS devices. Note that the list is in no particular order. 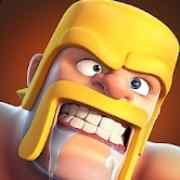 Clash of Clans is a game really tests your tactics. It is an online game, available on both iOS and Android.

You play as the chief of the clan who has to build and train his troops by using his resources in the initials. Once his troops are sufficiently trained, he can attack other players through the game’s fighting feature to earn more resources like elixir and gold to make his troops and defenses.

Build your village, upgrade, and raid opponent bases, the game is really easy to play. Yet if you want to dominate battles with 3-star attacks you need to be insightful. Dungeon Warfare 2 is a fantastic real-time strategy game available on android and ios. It’s a challenging tower strategy game where you play a dungeon lord, defending your dungeon against greedy adventurers and raiders with the deadliest of traps.

Dungeon Warfare 2 features 33 unique traps with 8 unique traits for each trap, more than 30 unique enemies, each with special characteristics, and 60 exciting levels to explore with more to be added later on with updates. All is a cool retro design. Rebel Inc. is a unique and exciting game from the creator of plague Inc. with millions of players worldwide.

Rebel Inc. is all about political and military engagement. A player has to manage all affairs of the region. When there is no war it doesn’t mean that the territory is stabilized and doing well.

To stabilize the political situation, you need to maintain a good relationship with the military and civilians of the region and preventing insurgents and regional adversaries from seizing the power of your suburb.

Rebel Inc. is available on both android and ios for free with in-app purchases. Red Sun is a fun RTS game. In the game a player is assigned control of troop, build a base, plan attacks strengthen his armed forces on the battleground much like a military strategy game but in real-time.

The game has tons of troops, tanks, nuclear weapons with lots of upgrades. Different types of units each one has its advantages, strengths, and weaknesses. The game was developed with a 2D isometric style and looks really nice on mobile devices.

RedSun RTS: Strategy PvP is a free to play title with in-app purchases and ads. However, You can get rid of all ads if you download the paid version of the game from Google Play. Command and conquer is a free to play mobile game. As the name suggests it is a military strategy game from the house of Electronic Arts with nice graphics.

The game is pretty simple, you got a base, an army and there is an enemy base on the opposite side of the level, three control pads surrounding a missile. The game is about staying in control of all places once.  A bar on the screen shows the time. Once the bar is filled up whoever controls the least pads will be hit up by a rocket. it takes half of the energy when a missile hits a player. 2 hits and the game will be over.

But don’t let the easy gameplay fool you. You need a solid strategy and a smart approach to the game if you don’t want to get hit by the missile. Players can choose commanders with various traits that will aid them in the Field.

Command and Conquer: Rivals is available on android and ios for free with “microtransactions“. Sounds EA enough! Mushroom Wars 2 is an award-winning real-time strategy game for android and ios.

It is super fun, beautifully designed yet free to play. Plan your defense tactics strategically with little mushrooms, lead your cute fierce army, and crush your withering opponents in the battle.

A  highly rated RTS with adorable graphics and an army of mushrooms for free? what more could you possibly ask for?

So here are our top 6 Best Real-time Strategy Games for Android and iOS devices of All Time.  We hope you enjoyed reading through it. Also, if you found it helpful, share it with your RTS lover friends. Lastly, don’t forget to hit the bell notification to keep updated on our excellent upcoming content.