Every software, app, game, has a beta version before its general release. It is a version that is made available for testing, typically by a limited number of users outside the developer firm. And Free Fire is no exception. Before everything gets added in the live servers, some players had the opportunity to test all the features in the Beta version of the game, commonly known as the Free Fire Advanced Server. In this detailed post, we will tell you What is Advanced Server in Free Fire and How to download it.

What is the Free Fire Advanced Server?

Advanced Server is the testing server for every new feature that is coming to the live servers of Free Fire. Players get a chance to test every new feature. After which they can give feedback to Garena about the new features, and Garena will then act upon those issues depending upon the scenario. You don’t need to have an account on Advanced Server. However, it is a great way for enthusiasts to know what’s about to come on live servers.

But you can’t just get into Advanced Server and start playing the game as the developer limits the number of players in the Free Fire Advanced Server to prevent it from overflowing.

To participate in the beta testing phase, players must have a Free Fire linked Facebook account. Now, here is the step by step guide to download and join the Free Fire Advanced Server:

Note: Both apps are different. So, There is no need to uninstall the standard version of Free Fire.

The OB20 Update of Free Fire was a huge success that brought Bomb Squad Mode, Kalahari Map, Steffie, and much more. After this event, the players are now enthusiastically waiting for the next Free Fire OB21 update.

The Free Fire Advanced Server of the upcoming OB21 update is live now until April 2. As seen in the advanced Server, the new update will bring new characters, mode, emotes, pates, and many other new features. Garena did not announce the release date of the Free Fire OB21 update.

Here are the new upcoming features of the Free Fire OB21 update given below:

A new female character named ‘Kapella.’ She is a famous pop singer and star with a unique Healing Song skill. She can increase the effects of HP skills and items and reduce damage received by teammates after she dies

A male character named Lucas will also be introduced in the mid OB21 update. Lucas is a football player with the Hat-trick skill. Using this skill gives Lucus an HP whenever he kills an enemy. When we keep adding more information about Lucas, once we get our hands on the OB21 update. 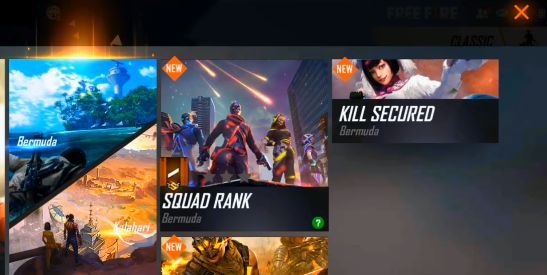 An all-new ‘Kill Secured Mode’ Mode has been added in Free Fire OB21 update. Played on the Bermuda Map, in this mode, two random teams are spawned on the map. Each player has to choose equipment set out of four. After that, they will fight with the opponent team. If a player dies, then he/she will respawn again. The duration of the match is 10 minutes. The first team that completes a total of 80 kills will be the winner.

A new feature called ‘Free Look’ has been rumored. The players can look in all directions after enabling it without moving the character. It is the same as the Free Look feature in PUBG Mobile.

The developer added Four all-new emotes. The names of these emote with their tag lines are:

Garena will also release Free Fire Max. In short, it is a high graphics version of free fire. This version would target players with high-end smartphones and would bring new characters and skins. Check out our dedicated article on Free Fire Max to know more.

According to leakers, the OB21 update was scheduled to be released in the middle of April 2020. But like all everything else, the update may be delayed due to the ongoing pandemic.

We hope you found our article ‘What is the Free Fire Advanced Server and How to download it‘ useful. Share with your Free Fire Buddies, and for more detailed coverage on mobile games, turn on notification by hitting the bell icon at the bottom right.