Free Fire has introduced one of the biggest events in the history of the game named Free Fire Wonderland. In this event, players can get free Characters, Character Lvl. 6 cards, all the Free Fire legendary gun skins, and more expensive rewards. Players will have to complete the scheduled missions during the event time to unlock all the prizes.

This event has been included to celebrate Easter. Any free fire players should not miss this event at any cost because these rewards are worth a lot of diamonds.

The details of the event are listed below-

Gun skins are an essential part of any battle royale game these days. Furthermore, In Free Fire, gun skins give players additional advantages over their opponent.

During the Free Fire Wonderland event period, players just have to log into the game to collect the legendary gun skins.

With the ‘All Guns Legendary Skin Unlocked’ offer, users can try legendary gun skin for free. Players will have to complete only one task to unlock all the legendary gun skins immediately. You can get the skins from Free Fire Wonderland (FF Wonderland) 19/4 Full Gun Skin Unlock tab. However, the gun skins are not permanent and will be available for free for 24 days only.

If you tune in to the game on 19th April, you get a character and level 6 card for free as a reward.

The Choose a Character’ event Free Fire users get one free character of his/her choice, along with a character one level 6 card free of cost. Here is how you claim your reward: 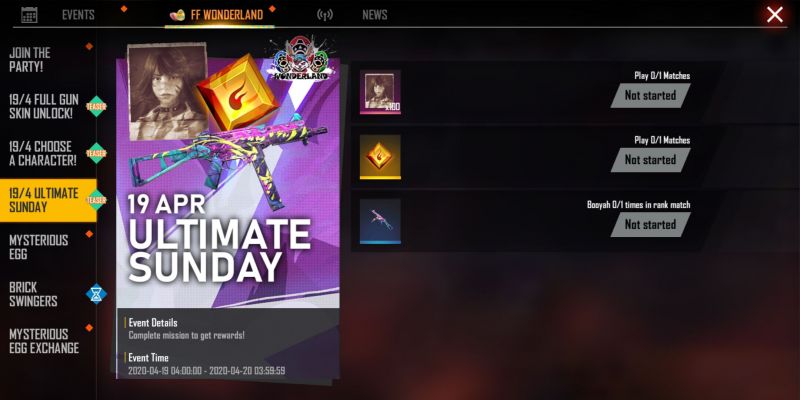 Every player will be rewarded with Character Fragment, an Awakening Shard Token, and a UMP-Lively Beast permanent gun skin. Players will have to complete the following missions:

We expect that instead of usual rewards, you will receive Magic Cube Fragments on 19th April 2020. You can exchange this Magic Cube fragments for the various rewards in the event section.

A new ‘Kill Confirmed’ named mode will come in the Free Fire on 19th April. But this mode will only be available for one day according to the latest reports.

So that’s all for today! We hope our article “Free Fire Wonderland: Get Free Characters, Legendary Guns Skins & Much More“ was helpful. Share it with all your Free Fire Buddies and let them know. Also, follow us on Facebook and turn on notification by clicking the bell icon at the bottom right (it’s free).

See also  Pascal's Wager: Deep into the Dark Mist expansion Launched with a Massive Discount on the Game