RPG Ruinverse is the latest role-playing game from the house of Kemco. Players will take on the role of a two-souled girl in this turn-based RPG.

Their newest creation, RPG Ruinverse has already launched for both iOS and Android platforms.

The game revolves around Kit, a soft-hearted transporter and his lively childhood buddy Allie. Allie may seem like a normal girl, but she is far from it; she has two souls! A condition has left the soul of another person named Alvyn stuck inside her. The two souls interchange whenever Alie comes into contact with Kit. 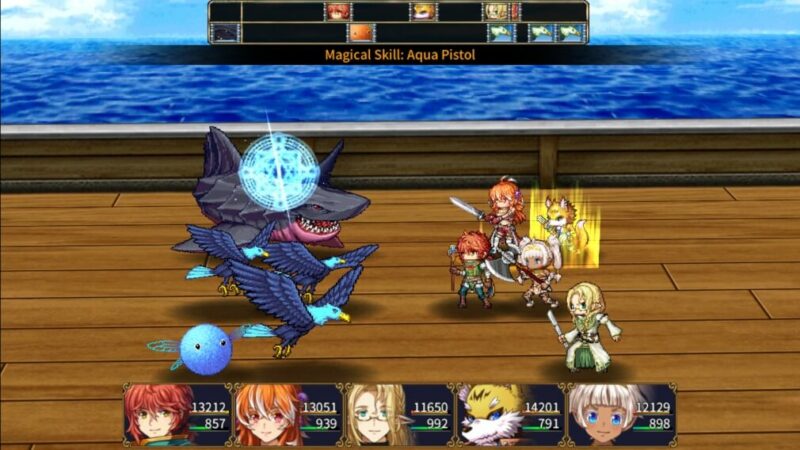 When Allie’s unique condition starts to put her life in danger, the two friends set off on a journey to the mysterious stone mountain in search of a cure. As their journey progresses, Allie and Kit are joined by a bunch of misfits, a third-rate swindler, a quack physician, and a ditzy dwarf travelling the world. Together, the group must overcome several dangers and hardships before it is too late for Allie.

Like many other role-playing games, RPG Ruinverse also follows a turn-based battle system. Players control the characters in their squad and the team to wipe out the opponent wins.

With each fight, the characters on your squad gain experience, level up and unlock skill points. One can use these to allocate skill points and focus on comprehending a single skill or a variation of prophecy.

While progressing each level, players have to upgrade their several pieces of equipment which will be dropped by enemies in turn-based encounters. Also, the game offers plenty of challenging hurdles on each level. So players will want to equip various characters with the right gear while experimenting with different battle formations to beat them.

Players will face plenty of unique bosses while they go around. They will have to defeat each one of them to pass all the challenges that the Ruinverse has to offer.

RPG Ruinverse offers its users all sorts of customisations to truly build a character; however, they like. Moreover, there is a casual mode available that will allow one to focus more on the narrative if one is curious about the story more.

RPG Ruinverse will support OS devices starting from 5.0 and up along with the game controller. Presently, it is only available in English and Japanese languages.

The game also offers plenty of things to explore, for players who wish to not just rush through the levels. All in all, gamers will experience a memorable adventure which will turn them into RPG lovers.

Tales of Crestoria : A Detailed Outlook (Everything You Need to...