One of the most popular Battle Royale games of today, PUBG Mobile, has four maps. Interestingly in PUBG Mobile, all maps have at least one gun that is unique to a particular map. One of them is G36C which is exclusive to the Vikendi Map. Tencent introduced G36C in PUBG Mobile last year.

What is G36C in PUBG Mobile? 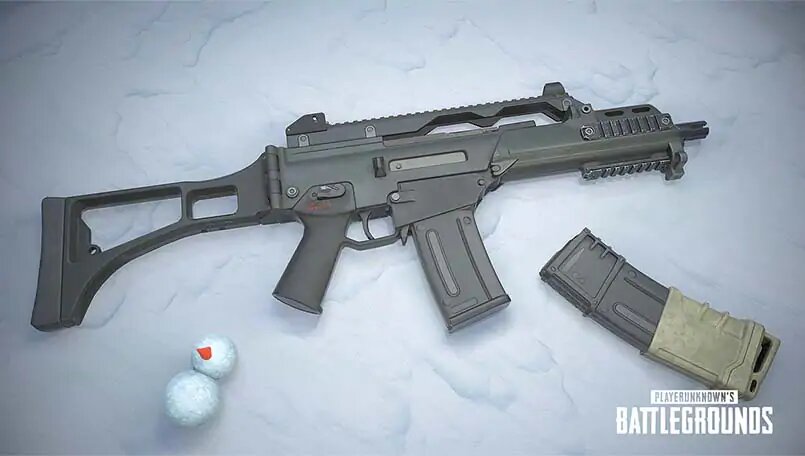 The G36C is an assault rifle that uses 5.56mm ammo(green). The gun was first spotted in the PUBG PC update patch 24. Later the G36C was introduced to PUBG Mobile in Season 6.  G36C in PUBG Mobile is exclusively available in the Vikendi map and replaces the SCAR-L.

In PUBG Mobile, G36C has a high rate of fire that matches assault rifles like – the M416, Beryl M762, AUG (0.086s between shots). However, the gun has much better controllability, especially while fighting the enemy at a close range.

You can say it is a shorter variant of  Scar-L but with a faster firing rate and higher DPS or Damage per second.

G36C in PUBG Mobile works only with 5.56mm ammo. The standard Mag holds 30 bullets while an Extended Mag holds 40. G36C has a lower and an upper rail for attachments, but a stock can not be attached. It has hit damage of 41 with a muzzle velocity of 870 m/s.

See also  Taxi Sim 2020 Game Review: is this Game Worth Your Time?

it offers two firing modes, Single-mode, and an Auto mode, but no burst. You can attach Quickdraw mag, Extended Mag, and an Extended Quickdraw mag to increase your bullet capacity and reduce reloading time.

G36 in PUBG Mobile supports all sights and scopes up to 6x.

The following are attachable to this gun: Where can we find G36C in PUBG Mobile?

G36C is only available on the Vikendi map. Here are some locations where you can almost always find the gun.

In Vikendi Map, three assault rifles (AKM, M416, G36C) are available. It can be confusing for players to choose the best gun they can use as a primary weapon. Here is a comparison between AKM vs. M416 vs. G36C. M416 is every PUBG Mobile player’s favourite gun due to stability and a greater rate of fire. It inflicts great damage with a firing rate of 698 rounds per minute. Despite that, with practice, the recoil is easy to control even with a 6x scope on. It is preferred by the players who can not control the recoil of other guns like AKM or M762 very well. AKM is for short-range. Hence, you can’t compare it with M416, which is an all-rounder. Some players carry both and use them according to the distance of the enemy. Generally speaking, M416 is user friendly and highly recommended. Whereas the AKM needs more skill when used for medium ranges, and it is a deadly weapon in the good hands.

G36C has a much higher fire rate compared to AKM with less bullet drop (easier long-range targeting). G36C in PUBG Mobile has more attachments and better controllability compared to AKM. The AKM has more per bullet damage but lower DPS compared to G36C.

The recoil of G36C can be further improved using a vertical grip that is not an option AKM.

Why is G36C better Compared to AKM?

Our verdict on PUBG Mobile G36C

In PUBG Mobile, G36C is Relatively easy to control. There is some recoil compared to M416, a maxed out, and not as many attachment options. However, the gun has a healthy rate of fire, damage.

G36C has more vertical recoil compared to most other 5.56 assault rifles, but a consistent recoil pattern. In other words, the gun only moves upwards and not left or right while spaying at a target. Thus, G36 feels much easier to control.

Here is a from the PUBG Mobile official youtube channel explaining it better.

In our opinion, it is an excellent choice for newer players, but there are better options for a pro. G36C is overall a great assault rifle, but you need to have a little bit of control to able to wield it.

Furthermore, ss most players generally prefer to play on Erangel, and as G36C is exclusive to Vikendi (One of the least played maps), it is easier for most to Master M416 than the former.

With that being said, the new Cold survival mode can change things up greatly and swing the favour of G36C.